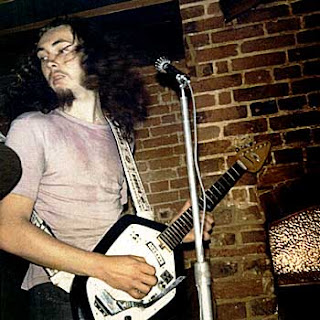 I was playing a rare old Del Rey guitar with Paul Coaker on bass (a Gibson EB 0, I believe). We were renting a large house in Fleet, Hampshire with John Bland, famous in the area as the DJ who fronted the Plastik Rock Disco and who then became our drummer, and Carole and Keith Lewis. Keith with Neil Soames ran Cosmic Amoeba Lites, one of those amazing light shows using coloured oils heated between glass slides. This house became known as Planet Oa or The Planet. 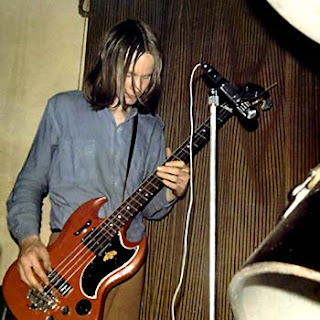 Paul, John and myself rehearsed and jammed solid for three months and finally started gigging with the new band Ebling Mis in early 1973. Loose and raw, it sometimes tripped out and sometimes tripped up, but never played safe. We did an assortment of gigs, from pubs such as The Crown in Alton, Hampshire (where Keith remembers us being kicked out for playing too loud!) to the larger free festivals in the summer of 1973 - including University of Surrey Free Festival, Windsor 73 (the band that opened the festival and appeared on an Open University film clip!) and Trentishoe Whole Earth Fayre where we were first on again. An amusing trip was had by one and all, as I recall. 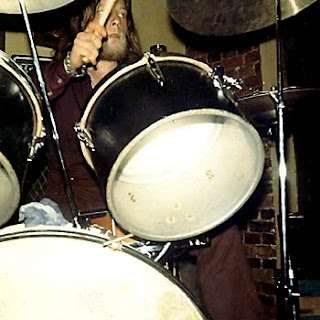 In July we played a gig in Guildford for the College of Art, where we supported a band called Phoenix featuring one, Roy St John - by this time he was based in London. He later moved back to St Louis, USA but has since returned to England.

The second Windsor Free Festival, organised by Bill Dwyer and Ian Jones was the most memorable of the three. Events started on Friday 24 August when we took charge of the generator and got John's record decks and PA going in the wooded area where the 72 Festival had been. This started after dark and ran well into the night. By 11am on the Saturday we had moved the van and gear to a spot which faced down the hill (to a place where the main stage was finally located) and here it was that Ebling Mis started the festival proper. 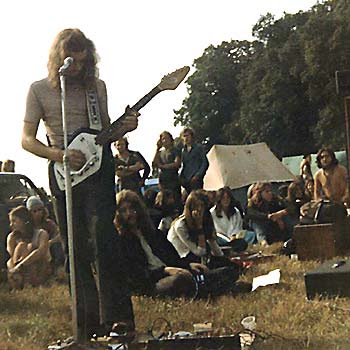 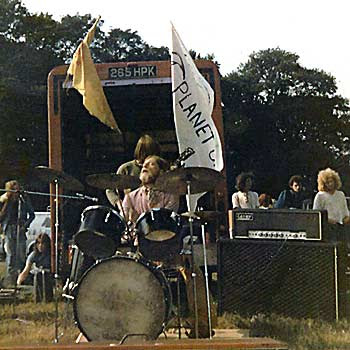 We also played on the Sunday night / Monday morning but this set bordered on disaster (as many did!) due to the mist and damp soaking into all the electronics and effects pedals. Later that night Ian Jones asked me to take over his duties as stage manager (I was the only person he recognised still awake who he could trust to do the job). This proved to be a most rewarding occupation and an opportunity to put into practice my belief that 'all bands are equal' and nobody had the right to jump the queue because they were more professional. It worked well. Every band, except one, contributed their PA system and John Bland somehow managed to wire them all together to produce a system that just about got the job done. It was estimated that between 10 and 15 thousand people attended.

The last Windsor Free Festival was in 1974. This turned to anarchy with running battles with police trying to force eviction, resulting in a compromise agreement that the festival would move to an approved site near to Stonehenge the following year (1975) and not be deemed 'illegal'. It continued there until the early 1980s when the government of the day decided it was to be stamped out.

Tomorrow's sun rose from out of your eyes
The native dances and the fireflies
Mysterious moons that hypnotise
Are you ready, are you ready?

With your smile you scatter love all around
The lowly tramp wears a golden crown
All your memory banks are solid sound
Are you ready, are you ready?