From December 1982 to December 1983 I was working with Tony Pettitt again (from Earthforce, 1977), now based near Carmarthen, South Wales and Bob Phillips from Farnborough, Hampshire. Two poets who had worked together before, doing performance poetry under the banner Winter Solstice Trucking Company, gigging at the West End Centre, Aldershot back in 1976. This new concept was a much expanded live performance unit with the intention of staging an assortment of songs, sketches, poems, dance and musical interludes.

The general theme was of an anti-nuclear nature, forming a statement of protest aimed at the world governments who indulged in the 'race for supremacy / total overkill' school of thought which prevailed in the early eighties. 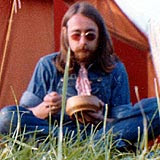 Rob Dingley-Linton
Tony, Bob and I began working with percussionist Rob Dingley-Linton from North Wales and a growing number of contributors based around the Carmarthen and Kidwelly districts, including from Glyn Abbey, Jim Greer (set design) with dance choreography and performance by Janet and Sue Bilsborough and Diane Greer. I first met Rob back in late 72, in the days of Planet Oa at Fleet, Hampshire. Bob Phillips and I made many journeys down to South Wales from Hampshire to work on this ambitious programme.

On the last of these occasions in December 1983, Rob was unable to make it. Days later while in Bristol news came to us of Rob's untimely death following a motorcycle accident, we just had time to make it up to Llansilin to attend his funeral. Any enthusiasm we had for the on-going project dwindled away while we came to terms with this sad loss.