During the summer of 1985 I met Ian Payne, who hosted regular jam sessions at Nanpean Farm near Cape Cornwall. By this time I'd had a few jam sessions down at Sancreed, with Malcolm Starr (guitar and vocals) and Geoff Tresidder on fretless bass guitar. Ian had played in many local bands - Sid's Taxi, Harmonix, Zambula and Sadig Sadag. 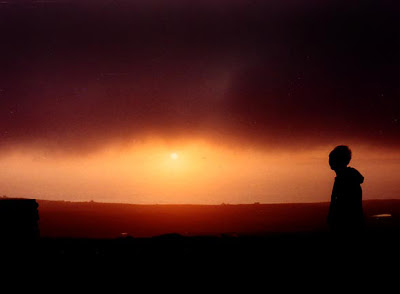 Steve Bayfield
In September, Steve Dyer moved to St Just from Bristol. We worked together in the studio and were both very interested in forming a band for live performance. This happened in January 86 and included local mystics, Alison and Med Reynolds (who later formed Thelemic Pulse), plus Ian Caple and Ian Payne. The resulting ensemble became known as the St Just Collective / All Saints / New Town Band. We played twice at the Trewellard Arms, a few miles from St Just. At this time it was the only location in the area where it was easy to put on gigs. However, the line-up involved around a dozen people and proved to be near impossible to manage for organised rehearsals, but the public response endorsed the need for a local band.