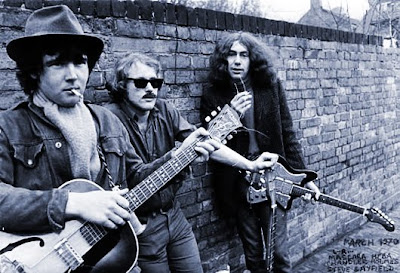 Heba Evans, Roy St John, Steve Bayfield
I began playing guitar in the sixties. The late Michael Heba Evans was the first person I jammed guitars with on a regular basis. In 1969 we started rehearsing with Roy St John (aka Chandler Holmes), all three of us playing guitar and doing some singing, and with Terry Murphy on drums. This became known as the Farnham Wall of Sound (a pun on the astonishingly small amount of equipment we had). We played one gig at the Guildford Civic Hall on 8 April 1970.

I did more gigs in 1970, playing acoustically at folk clubs in north-east Hampshire, some with Roy St John, and again playing electric guitar with drummers Rob Reeves and Dennis Roberts, and with John Lathey and Heba Evans on bass guitar. I also jammed with Cosmic Capers. This marked the beginning of the Rainbow Club evenings and the all night sessions held at Farnborough, Hampshire. Formerly called The Blue Moon, it was a ska club in the late 1960s and became a rock venue when George Collins took over its management (he also played some fine harmonica at some of the sessions). Other acts that appeared regularly, as I recall, were Arthur Bowstead and Tony Shaw, Tonk and Cold Fusion (later Fusion). Neil Soames, I believe, also had a hand in controlling the lighting.

Finding any venues in those days was virtually impossible - it usually meant someone having to hire a town or village hall (with no bar) and putting up posters or paying for advertising. It was normal to lose money on such ventures. For this reason the Rainbow Club was a gem of a place!